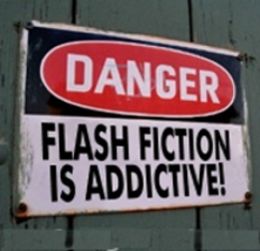 I love flash fiction more and more every month that we write it at the Confabulator Cafe.

I love being able to tell a full story in a quick little bite. Deciding exactly what details belong and which ones don't matter enough to be left in. I love to play with word choice. It's easier to work on the crafting of sentences when you only have 1,000 words to make them with.

It's also given me the opportunity to explore my darker side. The thing about horror is that reading (and writing) an entire horror novel can be exhausting. It takes a lot out of a reader and a writer to have to constantly maintain that suspense and continually add more horrifying things. In a short story, you don't have to sustain it for long, so it can be short and intense and then you can put it down.

Every time I sit down to write flash fiction, I'm worried my idea will be awful or won't work, and some weeks I don't get it done until the night before it goes live. But I'm four for four now and I'm happy with every story I've written. It's given me a lot of confidence in my ability to write. And even edit, since I have to be so meticulous when it comes to a 1,000 word story.

One of the best parts is, I am developing a portfolio of short stories, so I've been able to pick my best ones and start sending them out to anthologies. It's great practice, and once a writer has something published, it's easier to get the next thing published. Not to mention, submission is a goal I've had for years. Now I've finally done it. Twice!

The last part that I love about it isn't so much about me or my writing career, it's about my love of reading. I love to see what stories come out of the minds of my fellow writers. They just blow me away every week. And I find the stories ever so much more enjoyable knowing the faces and the personalities behind the tales.

Maybe after a year or so of all of us doing flash fiction, we can collect all of our stories and put them in an anthology of our own. I'd love to found the Confabulator Press someday.
Posted by Prospective Writer at 2:49 PM No comments:

Spooky Stories and a Lovely Bottle of Zinfandel

Today is the day I promote my other blogs, so let the shameless self-promotion begin!

I need a picture or icons or something for promo day. I'll work on that for next time.

So it's my favorite week of the month at the Confabulator Cafe. Flash fiction week! Once a month we all get a writing prompt and have to write a short story in 1000 words, give or take. This month our prompt was to write campfire stories; the kind of spooky stories you would tell while sitting around a campfire. So far, my fellow writers have managed to scare the bejesus out of me, so if you're up for a case of the chills, head on over to the Cafe and read the stories so far, including my story "The Fools on the Hill." Make sure to stop in all week for your daily cup of horror from the rest of the Confabulators, as well. 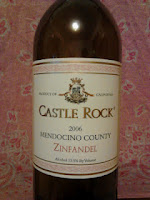 On Sunday, I posted about one of my favorite bottles of wine so far: the Castle Rock 2006 Zinfandel. It was a gift from my best buddy on my birthday. My only regret about this bottle is that I didn't crack it open sooner! And that it is all gone now; this wine was consumed in less than a week. To learn more about the bottle (and my birthday hi-jinks) head on over to Red Wine Reminiscence.

Posted by Prospective Writer at 4:29 PM No comments:

I submitted my first story to be considered for a publication.

I've been meaning to do this since January and I've been dragging my feet, but I finally got myself together, did some market research using the brilliant website Duotrope and found an anthology that I thought was a good match for one of my short stories.

And it felt so good to finally submit something, that I did a bit more digging yesterday, and submitted another short story to a different publication yesterday afternoon.

I think I might be a little bit addicted to submission now. It's terrifying and exhilarating and I know there is a good chance of rejection, but a little hope is definitely dangerous. Right now I'm riding on a high, although I'm trying to not get my hopes up too much. Part of submission is rejection, so I am attempting to steel myself for the worst.

The thing is, though, is that I am stubborn. If someone thinks I can't do something, I dig in my feet and throw myself into proving them wrong. So maybe, just maybe, a rejection won't completely crush me. It might just empower me.

Throughout this process, I have made a couple of decisions.

The first is that I need to keep writing more short stories. That's where my head is these days and that's where I'm having the best results. The Confabulator Cafe has done wonders for my ability to tell a story in a short space. I would like to try to write a short story on my own in addition to the Cafe's flash fiction assignment every month. Mostly because a lot of places won't consider work that's already been published, and some presses consider sharing a story on your website publishing.

I'm impatient and like immediate results. I need to use writing and submission as a distraction so I don't become overwhelmed and obsessed waiting for results.

I will let you all know the results as soon as I receive them! Good or bad. I might need help dusting off my pride if/when I get rejected.
Posted by Prospective Writer at 6:00 AM No comments:

It's Tuesday, and that means it's my day over at the Confabulator Cafe. Come see what I have to say about poetry (and stick around all week to see what my fellow Confabulators have to say, as well) in my post called What Rhymes with Poetry?

And if you find yourself thirsty, you can read about my latest wine conquest that I wrote about on Sunday at Red Wine Reminiscence, in my entry about the Sabor Real 2008 Toro. 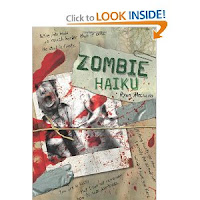 Because poetry and wine go together pretty well, in my opinion.

Even if I didn't particularly like the bottle I reviewed, and my favorite book of poetry is Zombie Haiku.

According to my new regime, I should be back here on Friday, so I hope to see you then!
Posted by Prospective Writer at 2:51 PM No comments:

I know I've made promises in the past about blogging more frequently, but as you may have noticed, I've never actually followed through.

I'm about to try once again to be a more active blogger.

These days I have three different websites where I live. One of them is here at Prospective Writer, albeit not as actively lately. I can be found a little more actively (in fits and starts) over on my wine blog: Red Wine Reminiscence. I try to post once a week on Sundays, although sometimes it is a month or two between strings of posts. And the last, most notable place where you are guaranteed to see me every week is over at the Confabulator Cafe. I blog every Tuesday at 11am at the Cafe.

That's three places where I hang out in cyberspace, so if I wrote a blog for each site week, you would get three touches from me each week.

My hope is to link to the wine blog and the Cafe from this website, so this one gets a bit more action.

I have my reasons for doing this, mostly because if I am required to write a personal writing blog once a week, it keeps me a bit more accountable. I should do at least one thing a week to make further steps towards my goal as a professional writer. I've stagnated lately, and I feel like it's time to get back to it.

The other reason is, I am a huge nerd, and just ordered Confabulator Cafe business cards. I decided after writing down the web address for the Cafe on slips of paper on two separate occasions, it was time to get more professional. On this business card, I also include the links to my other websites.

If I am going to start promoting my sites, I'd best start reliably providing content.

So the goal will be to post a wine blog review on Sundays, my weekly spot at the Confabulator Cafe on Tuesdays, and an update on my progress here on Fridays.

See you soon, friends. Be sure to visit Red Wine Reminiscence on Sunday!
Posted by Prospective Writer at 11:56 AM No comments:

Memorial Day Weekend always goes hand in hand with the Kansas City Science Fiction and Fantasy Society (KaCSFFS) annual convention: ConQuestT. I didn't get to go last year, but this year I had someone to go with, and to add to the fun, it was also his birthday weekend.

Overall, it was a fun, long, sobering, exhausting, and informative weekend filled with not great food, sickening elevator rides, uncomfortable chairs, a minor panic attack in a parking garage, an obnoxious kids concert that caused detours both on foot and in vehicles. We had a fabulous, luxurious hotel room, I met an adorable (cadaver) dog, I received lots of new book recommendations, and came home with a spark of motivation for writing and a certificate of excellence for winning a writing contest.

Between Friday and Sunday, I went to over a dozen panels led by writers, editors, publishers, game designers, and artists. Some were informative, some were hilarious, and some were boring and uncomfortable. I always feel equally motivated and discouraged after listening to published writers and small press editors talk. I realize that I share my dream of being a writer with thousands of other writers, and that even getting something published doesn't mean I'll get to quit my day job. Maybe ever. And how lucky I would be to get a break at all and make a little extra money.

But it also gets me excited to try.

Each year they do a Story-in-a-Bag contest, where you are given five index cards from different categories (plot, character, object, setting, first line) and you have an hour to craft a story using all of the elements. I burned through my story and thought it was crap when I was done, but I threw on a clever last line and decided I might as well submit it. I took the time to write it, after all, so what did I have to lose?

Apparently nothing, because I won in the amateur fantasy category!

Well, it was a three way tie. But still. I'm claiming it as a victory.

So my confidence in my writing is restored, I'm starting to take my search for short story markets more seriously, and I'm participating in Camp NaNoWriMo this month.

Overall, it was a great getaway birthday weekend with Jack. The experience just reaffirmed my belief that I have found the perfect guy for me. The Con was fun, but the time spent with him made everything else icing on the cake.

Although I made him birthday muffins, not birthday cake.
Posted by Prospective Writer at 11:39 AM No comments: