The LFK Writers and I decided to participate in the second session of Camp NaNoWriMo this year. I'd say we've had about as much success this time around as we did in April. That is to say, some of us wrote a lot of words, some of us never even started our projects.

I will probably not reach my goal of 15,000 words, but I should hit around 10,000, and it's allowed me to explore a story idea I might otherwise not have revisited. The idea now has more of a foundation, and has the potential to become something, I think. Maybe something like a throw-away, self-published book I put out under a pseudonym, but also maybe something I can edit into a hot urban fantasy type book. Either way, I'm glad I did this round of Camp NaNo. I definitely got something out of it, even if I didn't reach my word count goal.

All of the LFK Writers have started to have similar feelings about NaNo. Not just Camp, but also NaNo proper. We're all outgrowing it a bit. We all know we can write a given amount of words in a month. We are now, most of us, in a place where we need to write good words in a month, not just any old words to reach an arbitrary word count goal. Having a deadline and the camaraderie for NaNo are still great things, but I think we've all grown past the point where we need NaNo to write.

I have never been so proud of my writing group as I have been this year.

We are all writing short stories every month that are published on our website. We've been going strong for seven months now. Rachel has just started a brand new books series, and she's actually doing really well without her publisher. The LFK Women Writers are beginning to submit stories to various publications. We've actually had a couple be published already. Jack continues to have stories published on a regular basis, and he is taking the GRE this very morning so he can apply to the KU PhD in creative writing program.

And that's just the start. Our group is expanding: we've had a couple of past members become active again. We've recruited several new members who are actually contributing their stories to the Cafe, as well. Several of us are getting close to finishing up full-length novels that we are actually serious about getting published.

It's amazing to be a part of such an amazing group of writers. Watching all of us grow as writers and gain the confidence to put ourselves out there along this journey has been incredible. I fought long and hard to get this group to where it is. And now, I feel like, if for whatever reason I stepped away from them, they would continue on strong. It's not like the days where if I didn't show up, there was no group.

I don't often get possessive or brag about this, but back in the day, with the help of one or two other people, I started this writing group. I had no idea, ten years ago, that we would have such an amazing group of people now. It makes me happy in ways I can't even put into words.

So that's my biggest news, I guess. I have an awesome writing group. 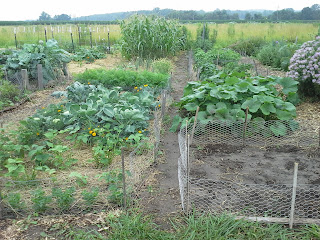 In other news, I finished editing my first full-length novel for R.L. Naquin. I have fourteen stories on submission right now, waiting to hear if anyone wants to buy one. I have written one short story a month for the last seven months. And...if all goes well...I will be starting edits on Monsters of Lawrence next month. Fingers crossed for me, friends. I am terrified about this project. It's so close to finished, but it still needs a ton of work before it's done. I know I can do it. I just need to jump in there and start getting my hands dirty.

Gotta get your hands dirty if you want things to grow. I'd say that goes for writing as much as it does for gardening. I've cultivated a lot of things this summer, from food to fiction. It feels pretty amazing.
Posted by Prospective Writer at 6:00 AM No comments: