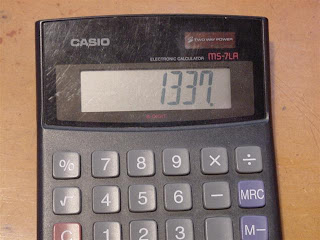 If you've had a chance to look at my Current Writing Projects page, or if you've talked to me since the end of August, you know that I am attempting to continue the novel I started in August for Camp Nanowrimo through September. When I reached 50k (with ten minutes to spare on the 31st, phew!!), I realized that I have a lot more story that needs to be told, and I am excited to tell it. I'm aiming to finish it off in another 40,000 words. The Writing Buddy helped me figure out that if I write 1337 words each day to meet my goal, I will have 40,110 more words by the 30th, and I will be "leet" every day in September!

For those of you who don't speak geek, if you type in 1337 on a calculator and turn it upside down, it looks like "leet" which is geek speak for "elite." Hilarious, I know. I feel like a huge tool explaining it. One of those whole funnier-if-you-don't-have-to-explain-it things. Moving on.

Before this year I've never had much luck at writing without a Nanowrimo to back me up, but with my word counter on the Current Writing Projects page, as well as the progress chart I made in Excel, I'm hopeful that I will be able to keep it up. I've been having a blast writing it, and it keeps getting better. I hope these fun days help me through un-fun days I know are ahead.

Amazingly, this story has continued to grow and evolve in ways I never even expected. Not bad for a random story I decided to write the day before Camp Nanowrimo began, with only a vague idea for a few characters and one dramatic action scene.

So the plan from here, like I mentioned, is to finish out around 90k words by the end of L33T September. I then plan to spend October going through it and figuring out what to keep and watch to ditch, what needs expanding and what needs changing, and get it ready for a rewrite. The rewrite probably won't start until next year, since that will bring me up to November and then I'll be embarking on another writing journey. That will give it some time to sit and simmer on the back burner of my mind. It should be done cooking by next year. I hope it turns out to be a delicious dessert: light and fluffy with absolutely no nutritional value, but irresistible and decadent, leaving you wanting more after taking the last bite.

Perhaps next year will be the Year of Editing. I have the Sally Prescott story I wrote this summer, the Monsters of Lawrence that I hope to have finished, and whatever story I write Nanowrimo 2011. I have my work cut out for me.

I think I'll just focus on September for now.

And dessert.
Posted by Prospective Writer at 3:19 PM